From BPWiki
Jump to: navigation, search

Today, we are going to look at these texts that we see every week on the wall and that we generally ignore. They have become just background decoration. Moreover, some people deliberately ignore them because they find the language gender exclusive and offensive. But we are really going to look at them and see:

Whoever does not have the Spirit of Christ, does not belong to him. Romans 8:9

You have already heard this text in a modern translation, Today’s English Version, in the readings. In the original context, Paul is telling the Romans that there is now no condemnation for those who live in union with Jesus Christ (8:1). But in our text, take out the two negatives and we have a tautology: a simple statement that does not provide any new information: If anyone has the Spirit of Christ, that person belongs to Christ. This text needs to be interpreted to give it meaning, and this is what the other text provides. 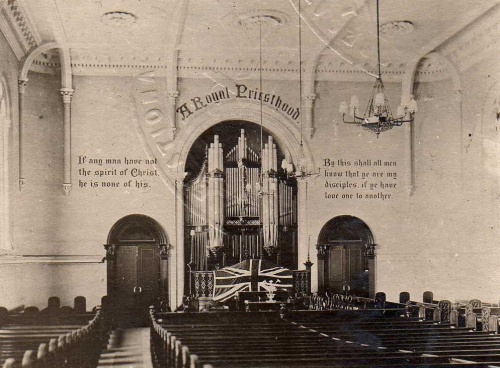 Once upon a time, there was another text painted above the organ, which served as a bridge to the other text. Have a look at the front of your service order to see a photo of this. The text, a royal priesthood, comes from 1 Peter 2:9:

But you are the chosen race, the royal priesthood, God’s own people, chosen to proclaim the wonderful acts of God who called you out of darkness into his own marvellous light.

Why did they originally choose these texts?

Was the text over the organ an original one, and when was it painted over?

I don’t know. You don’t know?!? But you’re the historian!

Let me tell you what I do know.

The interior of the church was plastered and painted at the same time that the front steps were built and the gallery at the back was erected; about three years after the building was first constructed, or four years after the foundation stone was laid.

The Minutes of the Deacon’s Meeting (equivalent to the Church Council) and the monthly Church Meetings tell us about the estimated cost of these works, the contracts that were made and the means by which they planned to finance these works (church meetings still haven’t changed; they’re still about money!).

However, they do not tell us who chose the texts and why.

Let me tell you something about writing history:

"History" is an orderly account (3), based on various sources (2), of what happened (1), not necessarily what actually happened!

My assumption is that the deacons did not discuss the texts because the minister himself chose them; that is, they were not a matter of discussion. And no records were kept of the decision. Walter Phillips, who wrote a very detailed biography of James Jefferis, does not even mention them.

So, what is the Spirit of Christ?

The text over here tells us: If you have love for one another, then everyone will know that you are my disciples. John 13:35 (TEV).

Love, AGAPE. The love God has for his people; the love Jesus showed to his disciples in the Gospel reading, is not something sentimental and abstract. It is more like compassion that issues in practical actions to benefit the person who is loved:

He did this as a practical act of love. They had washed themselves before coming to the supper, but their feet would have gotten dirty on the dusty roads on the way.

Love does not occur in a vacuum, but in real contexts, often of conflict or potential conflict. Please note that Judas was one of the disciples who had his feet washed. Love does not count the possible results of the action taken; love does what is helpful and necessary.

We have still one more text here to interpret the meaning of the Spirit of Christ.

Have a look at this window over here.

The James Jefferis Memorial window, erected two years after his death in 1917, for the 60th Anniversary of the church.

James Jefferis after his retirement remained a member of this congregation and sat in these pews. (I don’t know in which number pew he and his wife Marian and their family sat.) He would have looked at these texts that he had chosen all those years before, and maybe he began to wonder too, that it was expressed somewhat negatively. So, I like to think that on his memorial window he gave us another text with which to interpret it:

Where the Spirit of the Lord is, there is liberty.

Jesus put it even more strikingly than Paul: The Spirit of God blows where it will.

We limit not the truth of God to our poor reach of mind.

By notions of our day and sect, crude, partial and confined.

No, let a new and better hope within our hearts be stirred;

The Lord has yet more light and truth to break forth from his Word.

So, the next time someone complains to you about these sexist texts, you can offer them a translation: What is the Spirit of Christ? To have love for one another, in a context of free choice.

In conclusion, I would like to quote from another pastor of this church, John Bryant, who began his ministry here in 1945:

There is water to quench a person’s inmost thirst. There is music to lift his secret soul. There are purpose and meaning in life, if people will feed the spirit which distinguishes them from [other animals].

For a spirit, like anything else, will die if it is not fed, and a person may never know what joy he or she could have had for the taking.

The God who gave us a spirit, sent his Son to earth that through him our spirit might be fed so that we could attain our full stature.

That is the central message of Christianity: positive, dynamic; not a series of prohibitions.

That is the Christianity which is preached at Brougham Place Church. Because our lives have been transformed by it, we want to share it with you.