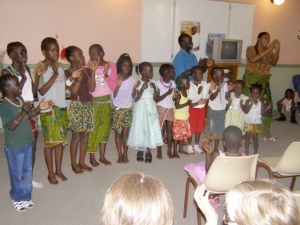 The Sukulu Na Bari is a very family-oriented affair, with students of all ages, including adults. There are five classes, divided according to age. There are more than 30 students currently enrolled, plus some pre-schoolers who come along with their mums who are teachers or students at the school. Most of the teachers bring their families along, then teach a mixture of their own and other children. 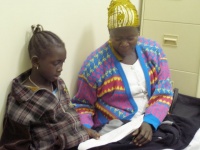 The teachers are all volunteers, and show exceptional dedication and faithfulness in coming to the school and to the monthly teachers’ meetings.

The management committee (Si’dayet Na Bari Sukulu) meets every two months. The Kuku Welfare Association, the Bari Community Association and Brougham Place Uniting Church are all represented on the Si’dayet. The School is incorporated as an independent body.

The fortnightly program includes classes in Reading and Writing, a refreshment break with traditional food, an all-school session with drumming, singing and dancing, followed by story-telling to pass on the oral history of the community. In June 2006 we had a trip to the Monarto Zoo to see African animals and plant life, which gave us lots of things to talk and write about. Last December we went on another excursion, this time to Victor Harbour. In January 2007 and 2008 we marched with other groups from many different countries in the Australia Day parade. 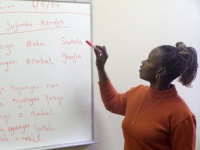 Initial funding was generously provided by the Forsyth Foundation, UnitingCare Wesley, which has enabled us to purchase basic equipment such as stationery, whiteboard, a computer, and office furniture, and provide refreshments on school days and reimbursement to teachers for out-of-pocket expenses. Private donations have enabled us to become members of the Ethnic Schools Association, and to purchase a pair of drums for the music program. An Establishment Grant was been provided by the Ethnic Schools Board, who also provide per capita grants for ongoing financial support on an annual basis. We are also supported by the Ethnic Schools Association, who provide invaluable advice and training.